Because of required WebUSB support, Ledger wallets currently only work on Chromium-based browsers like Brave and Chrome.

Ledger does not currently support batch calls; As a consequence, if you stake using the staking dashboard, you must use a hot wallet. Alternatively, you can use the Polkadot-JS UI that allows for single calls (i.e., bonding and nominating).

The Polkadot Ledger application is compatible with both the Ledger Nano S and the Ledger Nano X devices. Ledger devices are hardware wallets that keep your secret key secured on a physical device that does not expose it to your computer or the internet. That is, even if you connect your nano via USB to your computer, the private keys will not be leaked. Ledger devices are also hierarchical deterministic wallets (HD wallets), that is:

Ledger devices can be equipped with applications that are blockchain-specific. Such applications are usually developed by third parties and they enable the user to transact securely on the blockchain network. The Polkadot Ledger application allows you to manage Polkadot's native token, DOT. It supports most of the transaction types of the network, including batch transactions from the Utility pallet.

Ledger apps may not support all the transactions

If you have trouble using Ledger or following the directions below, you can try searching for your issue on the Polkadot support pages.

Here is a list of what you will need before using Polkadot with Ledger:

Check this support article to learn how to use Polkadot with ledger live.

Ledger Live should be off while using Ledger with Polkadot-JS UI as it can interfere with normal operation.

When adding a Ledger account using the extension or the UI, you will be asked to select an account type and an account index. The first lets you select an account, while the second lets you pick a derivation path from that account - think of it like a formula from which child accounts are generated. When you are creating a Polkadot ledger account for the first time on Ledger Live with name Polkadot 1, this can be added to Polkadot JS using the 0/0 derivation path (i.e. account type = 0 and account index = 0). If then you add a second account called Polkadot 2, this will correspond to the 1/0 derivation path, and so on. We thus have multiple parent accounts that can be viewed and used in both Ledger Live and Polkadot JS. Additionally, we can use Polkadot-JS UI to created multiple children accounts from each parent account. For example, Polkadot 1 with 0/0 derivation path can have child 0/1, 0/2, etc. that can be used within the UI. However, such children accounts cannot be used in Ledger Live, as it only scans through the parent accounts. So, keep in mind that the balances on the children accounts cannot be viewed, and you will not be able to transact with those accounts on Ledger Live.

While using a ledger device to sign transactions, depending on your browser and its security settings, you might need to confirm the USB connection through a popup like the one below: 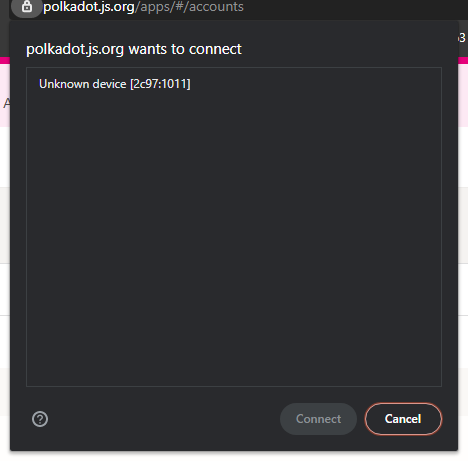 If you are adding your Ledger Nano for the first time, click on the "Unknown device" line and the "Connect" button will become available.

If you already connected your device but an error message appears before signing a transaction, make sure you have opened the Polkadot application on your Ledger Nano device. Visit this support page for more information about signing transactions using your ledger.

Confirming the Address on your Device​

To display your Polkadot ledger account address on your Ledger Nano you can follow the guidelines on this support article. Here you can scroll through and make sure the address matches to what is displayed on Polkadot-JS UI.

There are a few methods to check the balance of your account. Check out this support article for information.

General instructions to send a transfer can be found on this support page. To sign transactions with your Ledger nano check this support article.

In order to receive a transfer on the accounts stored on your Ledger device, you will need to provide the sender (i.e. the payer) with your address. To do so follow the instructions on this support page.

Before giving anyone your address, make sure it matches what's really on the Ledger by confirming the address on your device. Some malware will intercept clicks and clipboard requests and can change your copied value in-flight, so being extra vigilant around copy-paste operations makes sense.

For staking using Ledger devices check the section "How to stake using your Ledger" on this support article.

Check out this support page the learn how to remove democracy locks after the end of a Governance referendum.

This section is for developers only. It is recommended to install the application from Ledger Live unless you know exactly what you're doing.

Ledger apps for the Polkadot and Kusama ecosystems are developed by Zondax. When new functionalities are added to the Ledger apps, they are made available on a developer release for testing purposes. After a successful audit and review, the apps would be available for download and installation using Ledger Live. As it takes some time for Ledger to audit and review the release, the app upgrade option may not be available on Ledger Live when the new runtime is deployed on the network. If this happens, users cannot use Ledger devices with the Polkadot-JS UI, and while signing for a transaction, they will most likely incur the error message "txn version not supported". Please do not panic if this happens, as there are solutions to this problem. If you cannot wait a couple of days until the app passes the Ledger audit, you can install the developer release from the shell using the latest version published on the Zondax GitHub repository.

See this video tutorial to learn how to install the developer release of your ledger app.

To install the developer version make sure you have the latest pip version and follow the steps below: