What started as an approach to cross-chain communication, has evolved into a format for Cross-Consensus Communication that is not only conducted between chains, but also smart contracts, pallets, bridges, and even sharded enclaves like SPREE.

Overview of XCM: A Format, Not a Protocol​

XCM is related to cross-chain in the same way that REST is related RESTful. XCM cannot actually send messages between systems. It is a format for how message transfer should be performed, similar to how RESTful services use REST as an architectural style of deployment.

XCM aims to be a language communicating ideas between consensus systems, hence, "Cross-Consensus" with the following properties:

XCM is not designed in that every system supporting the format is expected to be able to interpret any possible XCM message. Practically speaking, one can imagine that some messages will not have reasonable interpretations under some systems or will be intentionally unsupported. 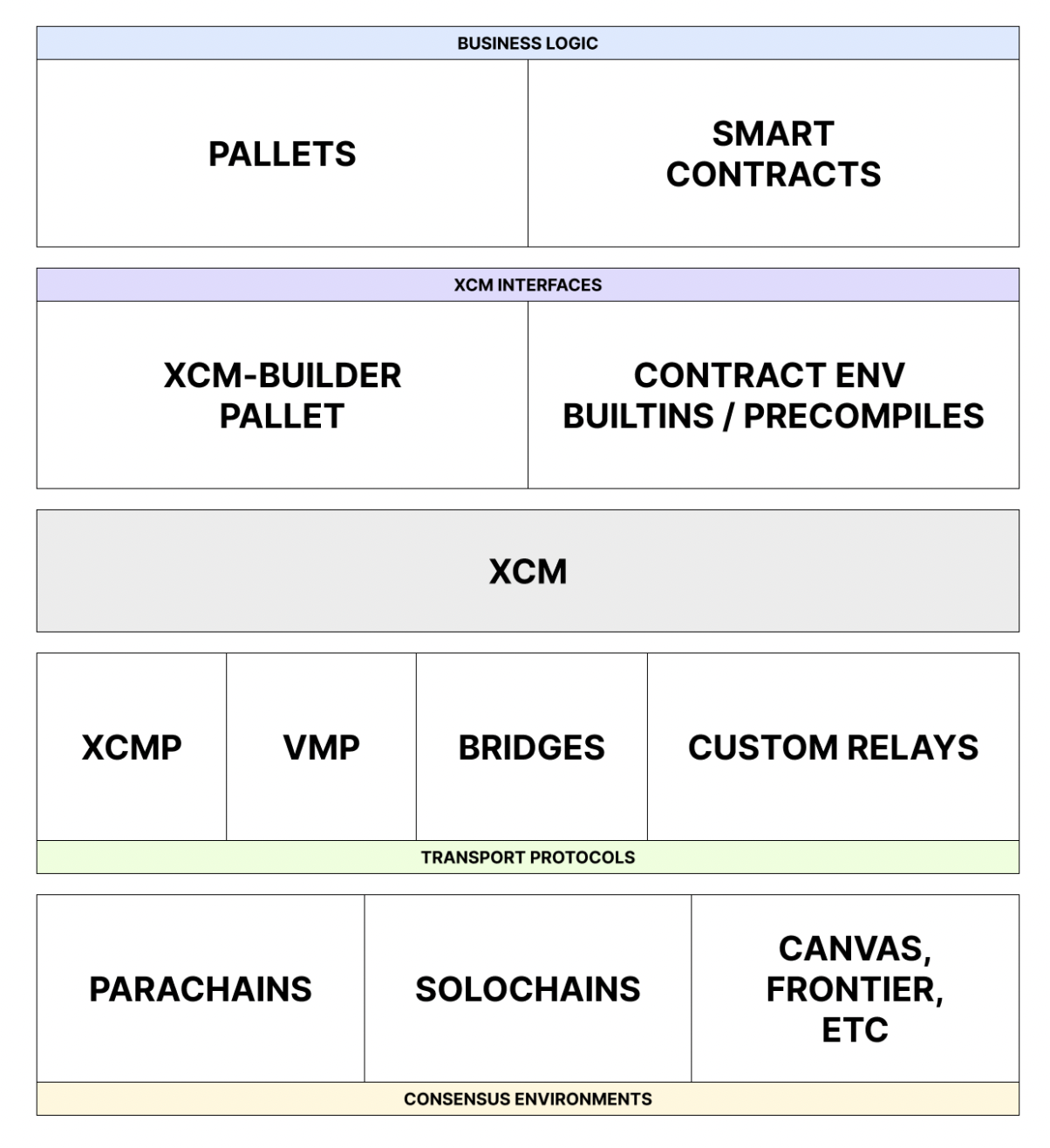 XCM can be used to express the meaning of the messages over each of these three communication channels.

With the XCM format established, common patterns for protocols these messages are needed. Polkadot implements two for acting on XCM messages between its constituent parachains.

There are two kinds of vertical message-passing transport protocols:

Messages that are passed via DMP may originate from a parachain. In which case, first UMP is used to communicate the message to the Relay Chain and DMP is used to move it down to another parachain.

XCMP allows the parachains to exchange messages with other parachains on the same Relay Chain.

The input and output queue are sometimes referred to in the Polkadot codebase and associated documentation as ingress and egress messages, respectively.

While XCMP is still being implemented, a stop-gap protocol (see definition below) known as Horizontal Relay-routed Message Passing (HRMP) exists in its place. HRMP has the same interface and functionality as XCMP but is much more demanding on resources since it stores all messages in the Relay Chain storage. When XCMP has been implemented, HRMP is planned to be deprecated and phased out in favor of it.

A stop-gap protocol is a temporary substitute for the functionality that is not fully omplete. While XCMP proper is still in development, HRMP is a working replacement.

However, this overall architecture and design decisions are more stable:

XCMP queues must be initiated by first opening a channel between two parachains. The channel is identified by both the sender and recipient parachains, meaning that it's a one-way channel. A pair of parachains can have at most two channels between them, one for sending messages to the other chain and another for receiving messages. The channel will require a deposit in DOT to be opened, which will get returned when the channel is closed.

For an updated and complete description of the XCMP message format please see the xcm-format repository on GitHub.

The Anatomy of an XCMP Interaction​

The collator node of parachain A will place this new cross-chain message into its outbound messages queue, along with a destination and a timestamp.

When the collator of parachain B is building the next block in its chain, it will process the new message in its inbound queue as well as any other messages it may have found/received.

During processing, the message will execute the smart contract on parachain B and complete the asset transfer as intended.

Check out our animated video below that explores how XCMP works.

An ultra-high level non-Turing-complete computer whose instructions are designed in a way to be roughly at the same level as transactions.

A message in XCM is simply just a programme that runs on the XCVM: in other words, one or more XCM instructions. To learn more about the XCVM and the XCM Format, see the latest blog post by Dr. Gavin Wood.

How To Make Cross-Chain Transfers​

A tutorial on downward, upward, and lateral transfers can be found here.