Collators maintain a full node for the Relay Chain and a full node for their particular parachain; meaning they retain all necessary information to be able to author new blocks and execute transactions in much the same way as miners do on PoW blockchains. Under normal circumstances, they will collate and execute transactions to create an unsealed block and provide it, together with a PoV, to one or more validators responsible for proposing a parachain block.

Collators are similar to validators on any other blockchain but they do not need to provide security guarantees because Polkadot provides those. If a parachain block is invalid, it will get rejected by validators. The validators are required to check the validity of submitted candidates, followed by issuing and collecting statements about the validity of candidates to other validators. This process is known as candidate backing. Validators receive an arbitrary number of parachain candidates with associated PoV from untrusted collators. A candidate is considered backable when at least 2/3 of all assigned validators have issued a valid statement about that candidate.

The assumption that having more collators is better or more secure is not correct. On the contrary, too many collators may slow down the network. The only nefarious power collators have is transaction censorship. To prevent censorship, a parachain only needs to ensure that there are some neutral collators - but not necessarily a majority. Theoretically, the censorship problem is solved with having just one honest collator.

Collators are a key element of the XCM (Cross-Consensus Message Passing Format). By being full nodes of the Relay Chain, they are all aware of each other as peers. This makes it possible for them to send messages from parachain A to parachain B.

Taking the Case for One Parachain​ 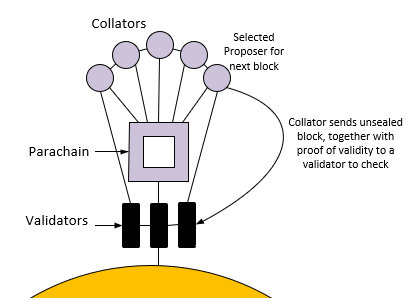 Collators in the Wild​

Blockchains that are built using Substrate are unable to hook onto the Relay Chain on their own. The Parity team built the Cumulus library to address this. Collators are being used on the Rococo testnet, and you can learn more about how they are used with Cumulus via the Cumulus repository. More information can be found under the Cumulus section on the build parachain page.